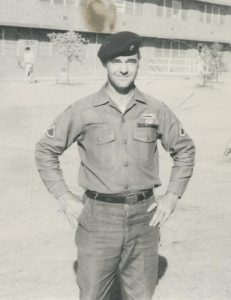 “I am not sure of the exact date but I remember it was around the 1st or 2nd of April that the team was inserted into Cambodia and started the long walk toward the target area which was a heavily used road and trail system that meandered into and out of the forest several clicks inside Cambodia. It was the same area that Cofer and I with 4 SCU had reconned so successfully a week before. I was the radioman for the team; Cofer was 1-0; RJ Graham was 1-1 and we had 3 SCU with us named Y Kit Nie, Siu Wok, and Y Ray Nie. On the way there Y Ray Nie got sick and complained of double vision and we had to have him med-evaced which irritated Cofer because the door gunners of the medevac chopper opened up on our perimeter in case any enemy were targeting them. The resulting noise pretty much told anyone within earshot that Americans were in the area and I’m sure put the NVA on the alert. I coordinated the medevac by radio and it went without a hitch as far as that went. We continued on with two SCU, Cofer, RJ and myself making five members on the mission which the remaining SCU didn’t like because they considered five to be an unlucky number and they made that superstition known to me and RJ confirmed it to me when I told him I had never heard that before. We continued on and encountered a small abandoned village that we came upon so suddenly and unexpectedly that we were standing in the clearing before we realized what it was. No one was home so the rest of the walk to target was as uneventful as a walk through the jungle could be. When we reached the target area we found a sheer escarpment several hundred feet high and a valley far below where people were burning bamboo to clear an area, I assumed, for raising crops. The burning bamboo sounded like gun fire to our ears at first until we walked to the edge of the escarpment and looked down on the scene below and saw the smoke and fires. The team then moved to a small area that had been cleared with a small bamboo edifice of some kind that was falling in. The roofed hut of some sort was located several yards from the escarpment on the side of a steep hillside with a road system at the base of the hill. We observed several trucks loaded with troops and materiel traveling the road at regular intervals and decided to set up an ambush in the hopes of collecting prisoners and intelligence about the purpose and use of the area. I coordinated our air assets on the radio and arranged for a signal to launch the helicopters to come to our aid. We did not realize the extent of the road system. There were, in fact, two roads running nearly side by side with 100 yards or so between them under the thick forest canopy. We mistakenly set up on the wrong road and after the trucks came down and I called for air support it was only a short while later that we realized we had set up too far from the correct road and could not effectively initiate the ambush. I cancelled the call for air support and the team settled in for a nervous RON position on the steep side of the hill. The rains came that night and I slept on my stomach with my face on the back of my hands so I could breathe since the water was actually flowing deep enough, even on the hillside, to make breathing hard without sucking in water once in a while. I awoke with wrinkled skin and about 5 feet or so downhill from where I had initially laid down.